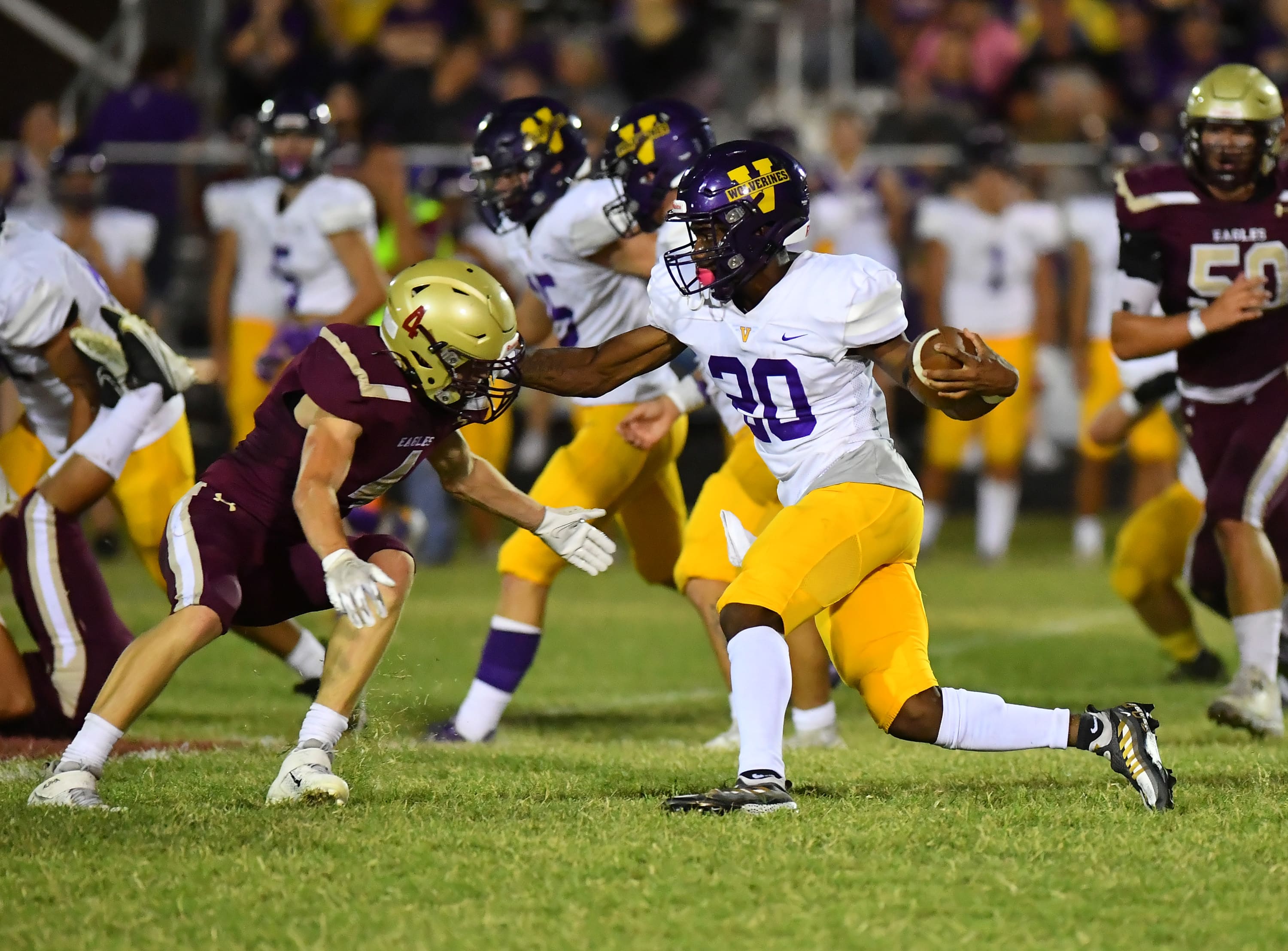 WARNER – Warner (3-1, 0-1) came into the game undefeated however, it was against lesser class A opponents. The Wolverines (2-2, 1-0) on the other hand taken the rough road through non-divisional play facing a 2A top ranked opponent and a 3A #3 ranked Liberty Christian squad.

Warner however did come out ready to play. Carson Parks, who had three tackles for losses, stopped Vian’s Masyn Wright on fourth and one from the Warner 45 on Vian’s opening possession.

The Eagles then marched down the field to take a 7-0 lead on a 5-yard pass from Jace Jackson to Ty Vinson. Preston Cannon carried the ball 10 times for 41 yards on the 11-play opening drive.

Warner’s lead was short lived. Vian responded with a 79-yard drive that ended with a 52-yard touchdown run by DeSean Mays. It was the first of two long touchdown runs for Mays, who finished with 112 yards rushing on just four carries.

Then things began to fall apart for Warner. The Eagles failed to cover the ensuing kickoff which appeared to be going out of bounds. Instead, Vian’s Jacob Brannet recovered at the Warner 14.

Vian’s Diego Ramos passed for 176 yards and two touchdowns as the fifth-ranked Wolverines overcame a sluggish start for a 44-14 win over Warner Friday night at Eagle Field.

Vian, which was penalized 14 times for 134 yards, found itself backed up to the 38 due to a pair of major penalties. However, on third and long, Ramos found Dreighten Fletcher open for a 34-yard scoring pass to put the Wolverines up 16-7.

Big plays continued to benefit Vian. There was a 45-yard by Mays and then a 61-yard pass from Ramos to Brannet. Ramos found Brannet for another score right before half as the Wolverines went to the break with a 38-7 lead.

Cannon’s success that came on the opening drive became stifled for the remaining of the half and he was held to four total yards for the rest of the opening half.

After the break both teams struggled. Vian’s only score came on a 15-yard halfback pass from Mays to Wright in the South Endzone to make it 44-14.

Warner’s defense set up its only score in the second half. Caden Thompson intercepted a pass and returned it to the Vian 28. Two Vian penalties later with the ball on the 12 yard line, Cannon ran it in for the final score. Cannon finished with 99 yards rushing on 26 carries.

The Eagles will travel to Okemah (2-2, 1-0) for their second divisional game while Vian returns home to face the Roland Rangers who are 1-3.