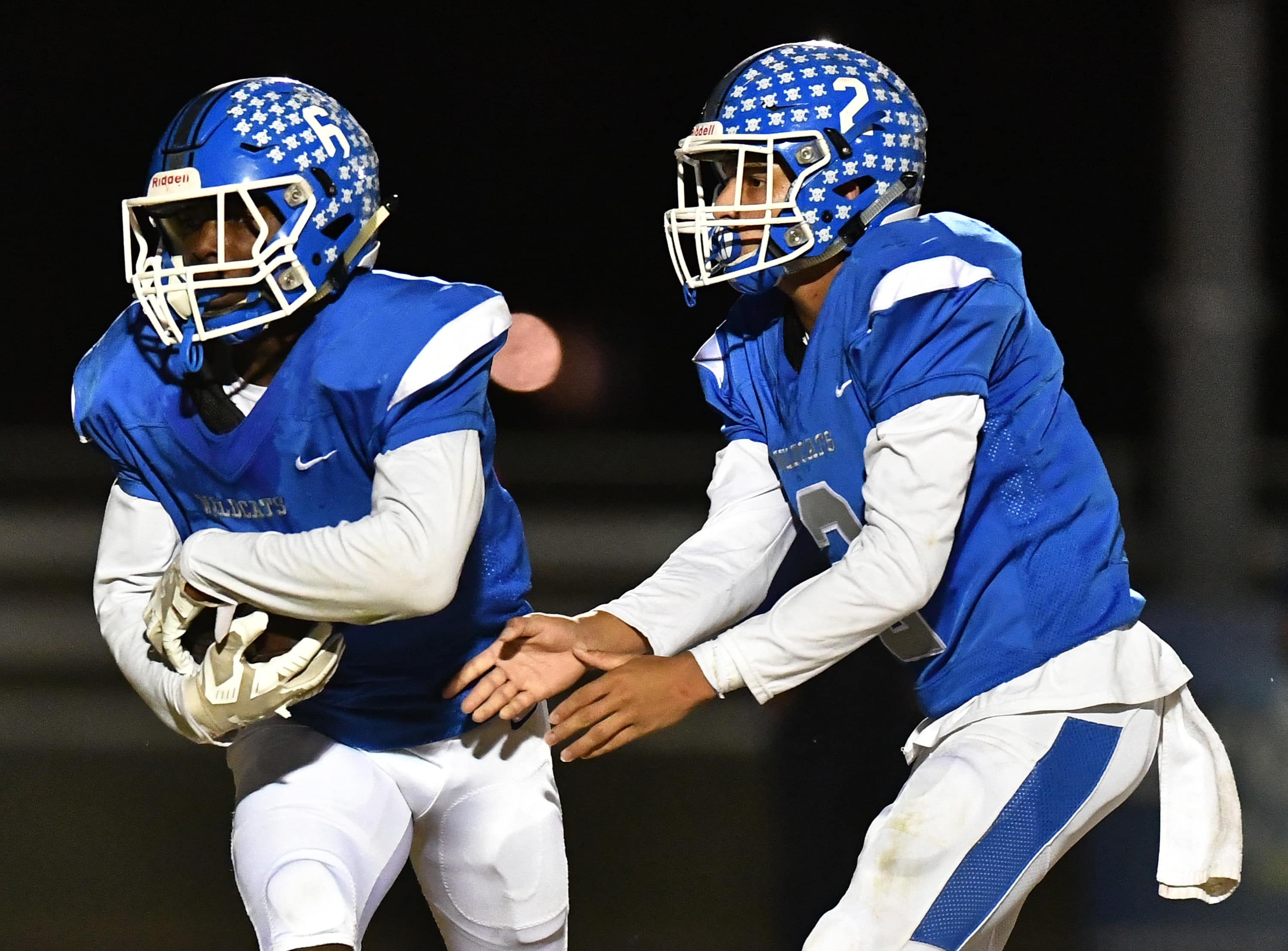 CHECOTAH – In a match-up of two top ten 3A teams tied for the district lead and separated by just one spot in the State rankings, The Checotah Wildcats (6-1, 4-0) found an answer to the Idabel Warriors defense Thursday night and came out on top of their first place district 39-7 in front of a home crowd.

It started as expected Thursday night with two good football teams battling it out for the top spot in 3A-3. Checotah opened the scoring on a pass from Jacob Barrett to Bailey Mcintosh, but the extra point woes continued when a 2-point conversion failed and left the Wildcats with a 6-0 lead.

Idabel (5-2, 3-1) responded with a sustained 60-yard drive that ended with a 2-yard plunge by Raydavice Golston with 4:28 remaining in the 1st. The successful kick gave the Warriors the lead 7-6.

The only other score in the first half came when sophomore Dontairre Fischer broke free for a 42-yard run and a score. The extra try was again unsuccessful, and the Wildcats headed into the locker room with a 12-7 halftime lead.

When the teams returned to the field for the second half the complexion of the game completely changed. Idabel could not keep from making mistake after mistake. Those miscues were taken advantage of and Checotah quickly broke out to an 18-point lead 25-7. Coach Chad Hendricks noted “Their front four gave us some fits but we were able to put things together and come out with the win”.

It started just two minutes into the half when Brendan Dan picked off a Raydavice Golston pass to stop a Warrior drive. Four minutes later, a bad snap on a punt attempt left Idabel backed up in the shadow of their goal post at the 1-yardline. On the first snap Barrett finished with a 1-yard plunge for a score.

The next Idabel drive also ended with a bad snap, this time with the Wildcats recovering at the 3-yardline. Along with the bad snaps the Warriors had two muffed kicks, three interceptions, a turnover on downs and a fumble.

All in all, Idabel turned the ball over to Checotah nine times during the contest. “Turnovers are big in a game like this. Special teams were big with the mishandled punts” said Coach Hendricks. “That’s a difference maker. They are a good football team. They will bounce back”.

The schedule makers didn’t do the Warriors any favors having Checotah, Stigler and Lincoln Christian on three consecutive weeks, any of which games could determine their fate in 3A-3.

Checotah will have Seminole and Roland the next two weeks and end the regular season at home against co-leader Lincoln Christian November 8th.

The 2019 season is shaping up to be a copy of last year with 4 teams in the running for the district title on the final night of regular season play.