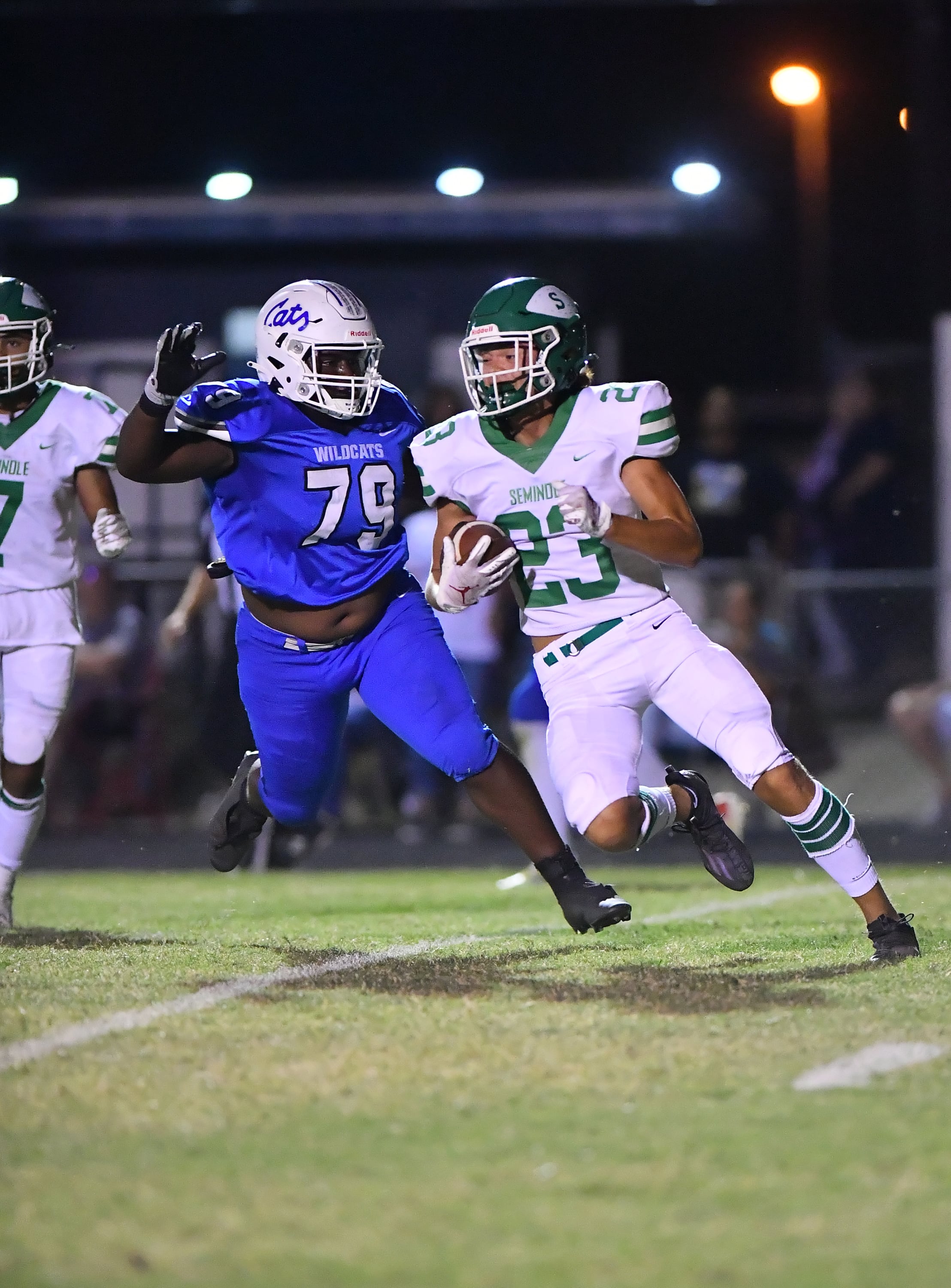 View/Purchase Game Photos
Sign-Up CSSN Subscription
CHECOTAH -The Wildcats came into Friday night’s game with Seminole as big underdogs but came within inches of pulling off the upset on the final play of the game. With just 3 seconds remaining quarterback Zack Mullen, tossed a floater into the end zone to Elijah Thomas and the ball was just off his fingertips and fell incomplete to end the game at 39-35 in favor of Seminole.

It all stared great for Checotah scoring quickly on their first drive on a touchdown pass to Thomas and a Dontierre Fisher dive to convert the 2-point extra try for quick 8-0 lead.

Another threat by the Wildcats came after a Trenton Dan interception and a long completion to Thomas, but the drive ended on a Fisher fumble on the 2-yard line.

The Chieftains took advantage of the turnover and after two long gains by Jason Batise that took Seminole to the 27 yard line, they put the ball in the end zone but failed on the 2-point try by Garrett Chaffin with 3:18 still remaining in the opening quarter.

A Chieftains interception by Lantz Fixico on the 3-yard line thwarted yet another Checotah drive at the end of the first quarter.

Checotah would strike again on a fumble recovery by Dan that resulted in a 59-yard return for a touchdown and a 15-6 Wildcat lead.

With 6:53 remaining in the half, a Seminole miscue on a bad snap turned into a Chieftains score when quarterback Brendan Rodriquez scooped up the ball and scampered 8 yards into the endzone. The 2-point pass attempt went incomplete, and the score remained 15-12 Wildcats.

The second half began with a Chieftains drive that ended in a Rodriquez touchdown putting Seminole back in front 25-22.

The ensuing Wildcat possession ended with a Fisher fumble and the Chieftains drive, aided by a 65-yard run by Fixico on a double reverse, made it 32-22 Seminole.

Another score by Fixico with 5:22 remaining added to the lead and the third quarter ended in a 39-22 Seminole lead.

A Wildcat drive in the beginning of the fourth quarter ended in a Mullen to Thomas strike that would bring Checotah back to within 10 points 39-29.

With the Wildcat defense stiffening, Seminole was forced to punt on their next drive. Checotah, now with the momentum drove the ball down the field ending in another Mullen to Thomas score. The extra point kick, however, was blocked to keep Seminole in the lead by 4 points 39-35.

Now with 2:34 remaining in the game and a riled up Wildcats defense, Checotah stopped Seminole on a 4th and 6 to give the Wildcats one more shot with only :52 remaining from the 48 yard line.

An attempt to the endzone fell incomplete but 3 seconds still remained for one last shot. The final play of the game came when Mullen tosses a pass to a wide open Thomas, but the ball went off his fingertips to end the game.

This game was by far the best effort for Checotah who will try to keep the momentum going next Thursday when they Host Westville (6-1). The Chieftains (6-0) will have their hands full Thursday when they take on Lincoln Christian (7-0) at home in a battle of the undefeated.