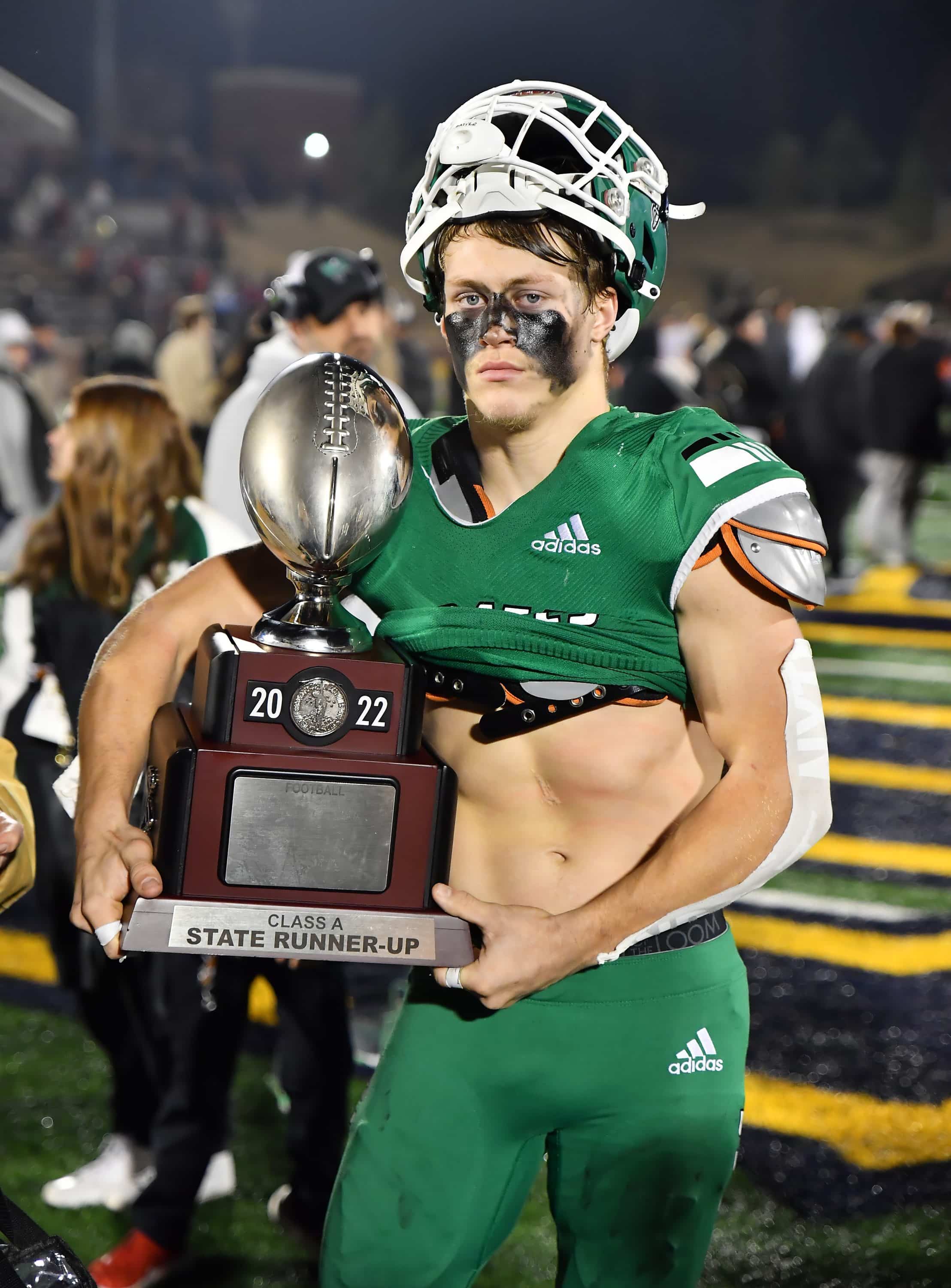 EDMOND – The Gore Pirates and the Fairview Yellowjackets both came into Saturdays championship game at Edmond 14-0 but only one would leave with a golden football.

The Pirates run at a perfect season ended at the University of Central Oklahoma with a 32-28 defeat at the hands of the Fairview Yellowjackets.

The problems started early for Gore. On the opening kickoff the Pirates muffed the recovery and stared their opening drive on their own 5 yard line. With no room to operate they were forced to punt and the ensuing Fairview drive ended in 7 points.

Senior running back Gunner Dozier tied the contest at 7 on a 54-yard run but on his next series, he went down with an injury to the left forearm that caused him to miss the final regular season game and part of two others, including the first-round playoff game.

He did not return until the third quarter, but had just four carries in the second half for two yards. He finished with 61 yards on the night after having 1,752 coming in.

With Dozier out, Noah Cooper led a 44-yard march after a three-and-out, carrying the final 17 yards to a 14-7 lead. On the kickoff, Gore’s Hunter McGee recovered a fumble at the Yellowjacket 33 and it appeared Gore found a gear and was headed for a two-score lead but the  drive stalled at the 8 and O’Connor’s 22-yard field goal attempt was off the mark.

In the second quarter, Gore’s defense forced a punt. Jackson Duke fumbled, and Fairview’s Kaleb Outhier recovered at the 14. Quarterback Jax Bernard hit Austin Houk for a touchdown and a 14-14 tie. Bernard’s 19-yard field goal with 3:23 until half gave Fairview a 17-14 lead.

Gore would then take it from its own 43. A 15-yard carry by Duke was later followed by an 18-yarder by Cooper, who broke off a hit at the 15 and had a first and goal at the 8, but Cooper fumbled at the 5 and with :36 left in the half Gore found itself trailing at the break for the first time all season.

In the second half, Cooper’s interception on defense helped the Pirates regain the lead early in the third when he went 18 yards in the air to Wyatt Marrel to make it 21-17.  Fairview answered with Perez scoring on a 2-yard run midway through the third

Yet another Pirate miscue on the ensuing kickoff when the ball illuded Liam Edwards at the Pirates 36 yard line and was recovered by Fairview. Gore was hit with another questionable interference call, the second of the night, giving the Jackets a first-and-goal at the 16.

Dayne Perryman and Ben Kirkpatrick teamed up on defense to stop the Fairview drive at the 1 yard line setting up a 99-yard scoring drive for Gore that culminated with a 2-yard Cooper to Perryman pass. But Fairview had an answer against a defense that had dominated foes all season.

With 6:52 left in the game, Perez scampered for a 14-yard scoring run that put the Jackets up for good to earn the 2022 Golden Class A Football.