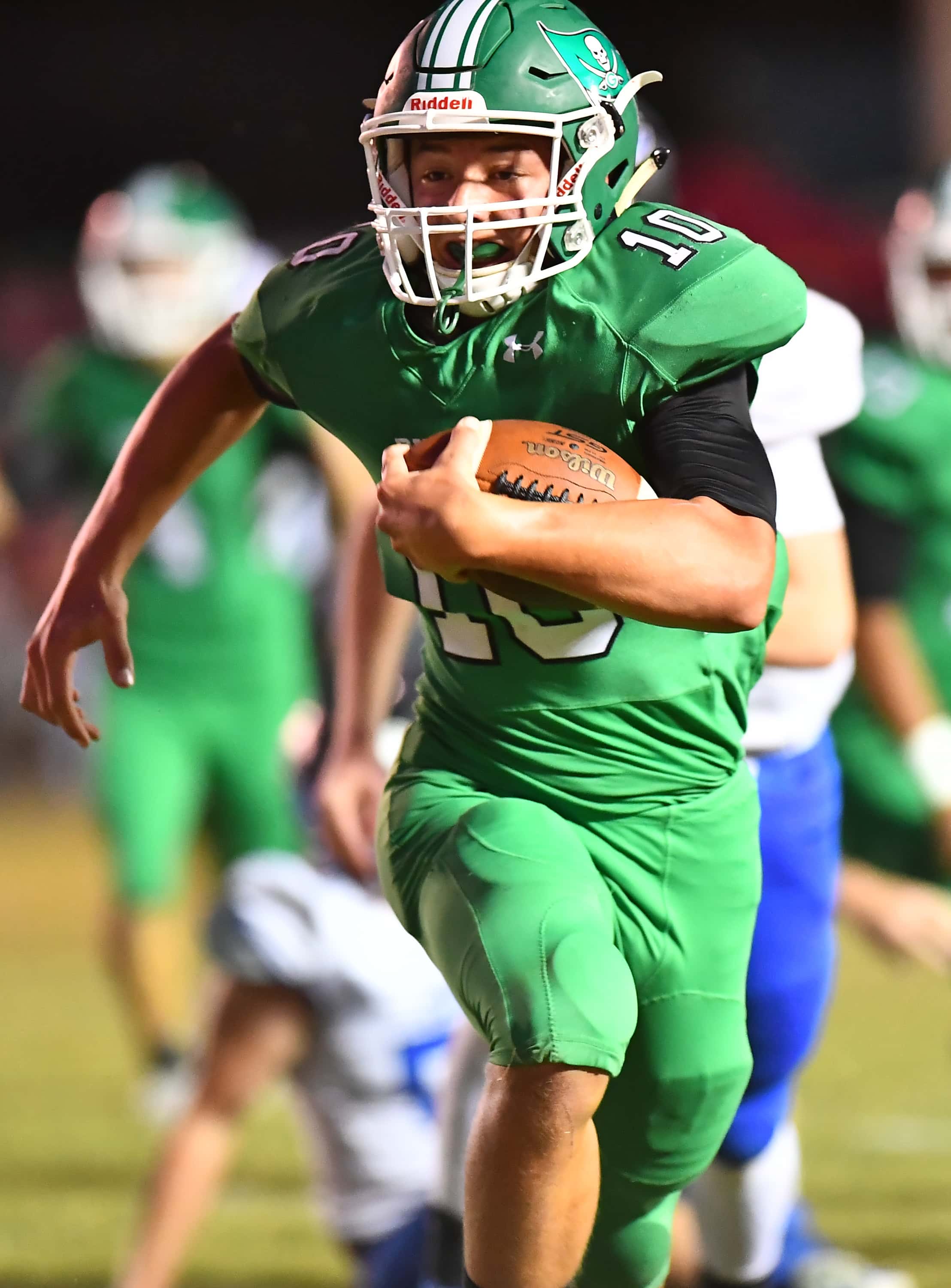 View/Purchase Game Photos
Sign-Up CSSN Subscription
GORE – The OSSAA, Football Class A district 8 lead was on the line Friday night when the Colcord Hornets (5-1, 3-1) took on the Gore Pirates (4-0, 4-0) in a Conference match up at Gore High School.

It didn’t take long to get the scoring started. After receiving the opening kickoff, the Pirates began their drive with their injured starter and captain Wesley Shanks at the helm. By design, Shanks was only in for the opening play to start the game and completed a 30-yard pass to get the Pirates rolling. And roll they did! Two plays later it was Gunner Dozier getting the Pirates on the board just 25 seconds into the game.

The Colcord opening drive went 3 and out. Their punt was returned to the 42 yard line with an extra 15 yards tacked on for a late hit. Two plays later it was Dozier again hitting pay-dirt and the Pirates advanced the lead to 12-0 less than 3 minutes into the opening period.

Gore forced a punt early in the second and started their drive from the 10 yard line after a penalty for a block in the back. This time it was four plays to go 90 yards, ending with Dozier’s third rushing TD of the night to give Gore a 18-0 advantage with 7:13 left in the half.

The second half started much like the first. After receiving the opening kickoff, the Hornets fumbled on the opening play and the Pirates took over on the Colcord 15 yard line. On the next play it was Dozier again for his fourth touchdown on the night just 18 seconds into the second half.

Colcord finally got on the board on their second play of the drive with a 40-yard scamper by Stormy Odle. The 2-point conversion was good, and the Hornets cut the lead by 8 to 24-8 in favor of Gore.

On the ensuing kickoff that was returned the Pirate’s 49 yard line, Dozier put together two runs that were good for 50 more yards and took the ball to the Hornets 1 yard line. Zane Craighead finished the drive with a quarterback keeper to bring the score to 32-8 Pirates.

Before the period would end, Gore would tack on 7 more via a pass from Craighead to Keigan Reed for a 30-yard score and a 39-8 Pirate lead in the third.

The next Hornet drive ended with a Jackson Duke interception at the Pirate 34 but, the Hornets did manage another score late in the fourth to arrive at the final score of 39-15. The game would end as it started with Shanks taking the final snap in the victory formation for Gore.

With the win the Pirates remain undefeated in the district and gained a huge advantage toward a Class A District 8 title.

Gore will remain home next week to take on the Porter Pirates (2-2, 1-0) while the Hornets remain on the road in Talihina to challenge the 0-4 Golden Tigers.