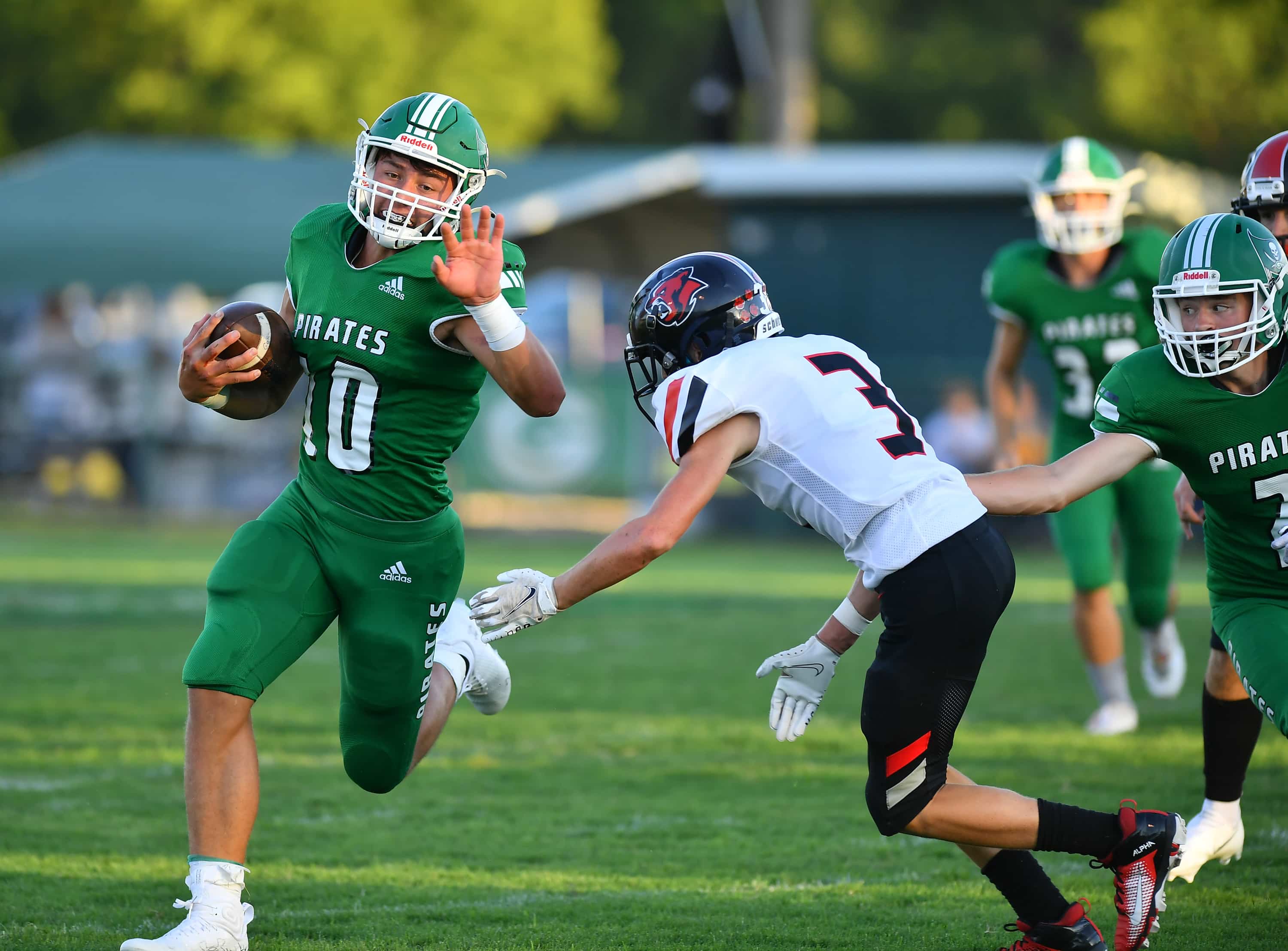 GORE – The Gore Pirates (2-0) defense remains unblemished as their opponents put up another zero. After a 60-0 skunking of Wilburton last week the Bucs returned home to do it again, this time the Keys Cougars (0-1) were kept off the scoreboard as Gore posted their second win of the season with a 47-0 shutout of the Cougars.

It started early for Gore when after a 25-yard scamper by Gunnar Dozier, Liam Edwards got into the end zone on an 11-yard toss from — just 2:37 into the game.

Keys first possession ended quickly with a fumble on the 19 yard line on their third play that put the Pirates offense back on the field.

Two plays later Dozier ran into the endzone from 6 yards out to give the Pirates a 14-0 lead with 7:47 still remaining in the opening period.

On the ensuing kickoff, Trevin Guthrie had a nice 40-yard kick return to mid-field for the Cougars, but the drive stalled resulting in the Pirates third possession of the game at their own 25.

After a 34-yard Dozier run Jackson Duke broke a tackle and got into the end zone on a 14-yard run. The Christion
O’Connor kick hit the right upright with 2:50 still remaining in the opening period to make it 20-0 Pirates.

As the second quarter opened, Keys found themselves at the Pirates 12 and inches shot of a first down. On 4th and less than a yard. After Noah Combs made the line to gain three consecutive losses put the Cougars 4th and long at the 20 yard line but  Combs got sacked again and Gore took over on their own 24.

On the second paly of the drive Journey Shells got wide open over the middle for a 60-yard reception from Noah Cooper and another Pirates touchdown. This time the O’Connor was good and with 8:18 remaining in the half Gore led 27-0.

Another Cougar drive was stopped by Gore took over at their 40. On the first play from scrimmage Gunnar Dozer broke a 35-yard scamper into Keys territory. On the next play it was Cooper to a wide open Ben Kirkpatrick for 25-yards and another Pirates touchdown. A rare O’Connor miss kept the score 33-0.

And returned it to the Cougars 39 yard line. On the first play Liam Edwards took a end around pitch from Cooper and raced 39 yards for the score that put Gore up 40-0.

With Duke now in at quarterback and Gore’s second offense on the field, Freshman Bladen McCartney took a hand-off from Duke and scampered for a 29-yard touchdown and a 47-0 to end the third quarter.

There was no scoring in the final period and the game ended 47-0 for another Pirate win. Gore has now outscored their opponents 107-0, who were both 2A squads one class up from the class A Pirates.

Gore will travel to Mounds next week for their first Class A opponent and Keys return home to Battle 4A Stilwell.