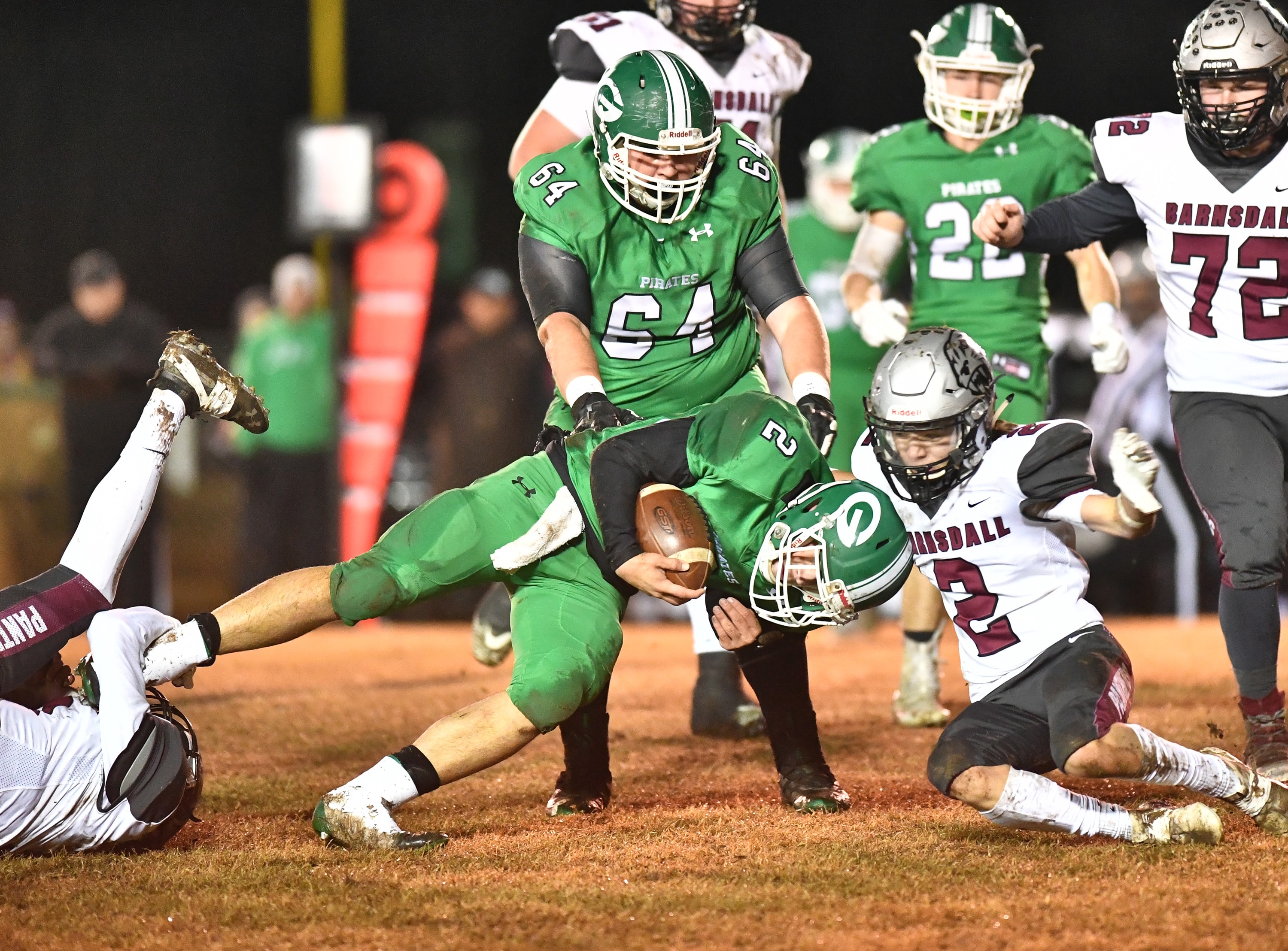 View/Purchase Game Photos
Sign-Up CSSN Subscription
GORE – The Gore Pirates had plenty of opportunities Friday night but failed to complete drives and fell short against the Barnsdall Panthers 29-26 to put an end to an exciting season.

Gore’s second series ended with a Weston Shanks 2 yard plunge into the endzone for a 7-0 Pirate lead with 2:27 remaining in the opening period.

Barnsdall fullback Michael Myer responded on the Panthers next drive with 56 seconds remaining in the first quarter with an 18-yard rush for a score to tie the game at 7.

With ten minutes remaining in the half the Pirates were backed up on their 15 yard line facing a 3rd down and 18. Shanks connected with Gunnar Dozier for 23-yards on the near sideline to keep the drive alive, only to turn it over to the Panthers on the 4-yard line just 3 plays later.

With only 25 ticks left in the half Barnsdall’s QB, Joe Cole ended a drive with a 3-yard rush to put the Panthers up 14-7 at halftime.

When the teams returned for the second half, and a wet ball under a steady drizzle, both teams returned fumbles to open the period. It was the Panthers who would be the first to strike with a 15-yard touchdown pass by Cole.

Now leading 21-7 Barnsdall lost composure near the end of the quarter. The first mistake was a targeting foul by Cole on a hit on Shanks near mid-field that resulting in a 15-yard penalty and Coles’ ejection. Another 15-yards was added to the penalty for a sideline violation.

On the very next play Barnsdall’s defense was hit with another 15-yards for a personal foul infraction that was accompanied with yet another ejection. In all, the Panthers were hit with 50 yards in penalties and two ejections in a matter of minutes, giving the ball to the Pirates on the 11-yard line.

With 24 seconds left in the third quarter, Shanks ended the penalty aided drive with a 2-yard plunge into the endzone to bring the score within 7 points.

With their starting QB out of the game Myer took over the signal calling duties. With time ticking down in the third, Myer broke free up the middle on a first and 20 play for a 75-yard Barnsdall touchdown. Myer added a 2-point conversion to bring the score to 29-14 going into the final period.

In the final period is when the Pirates had their chances. Shanks opened the period with a touchdown, but the Pirates tried for the 2-point conversion and were unsuccessful taking the score to 29-20.

After a Panther drive stalled deep in their own territory, a bad snap on the punt attempt resulted in a gore first down on the Barnsdall 2 yard line. Shanks made three attempts to score resulting in a 4th and goal on the 1. Two scores down, the Pirates went for the touchdown in lieu of a field goal that would have put them within six, but they were again stopped and remained down by 9 points.

The importance of those 3 points came to light after Shanks would score with little time remaining to get within 3 points, 29-26, but another failed 2-point try ended the scoring there and also ended the Pirates season.