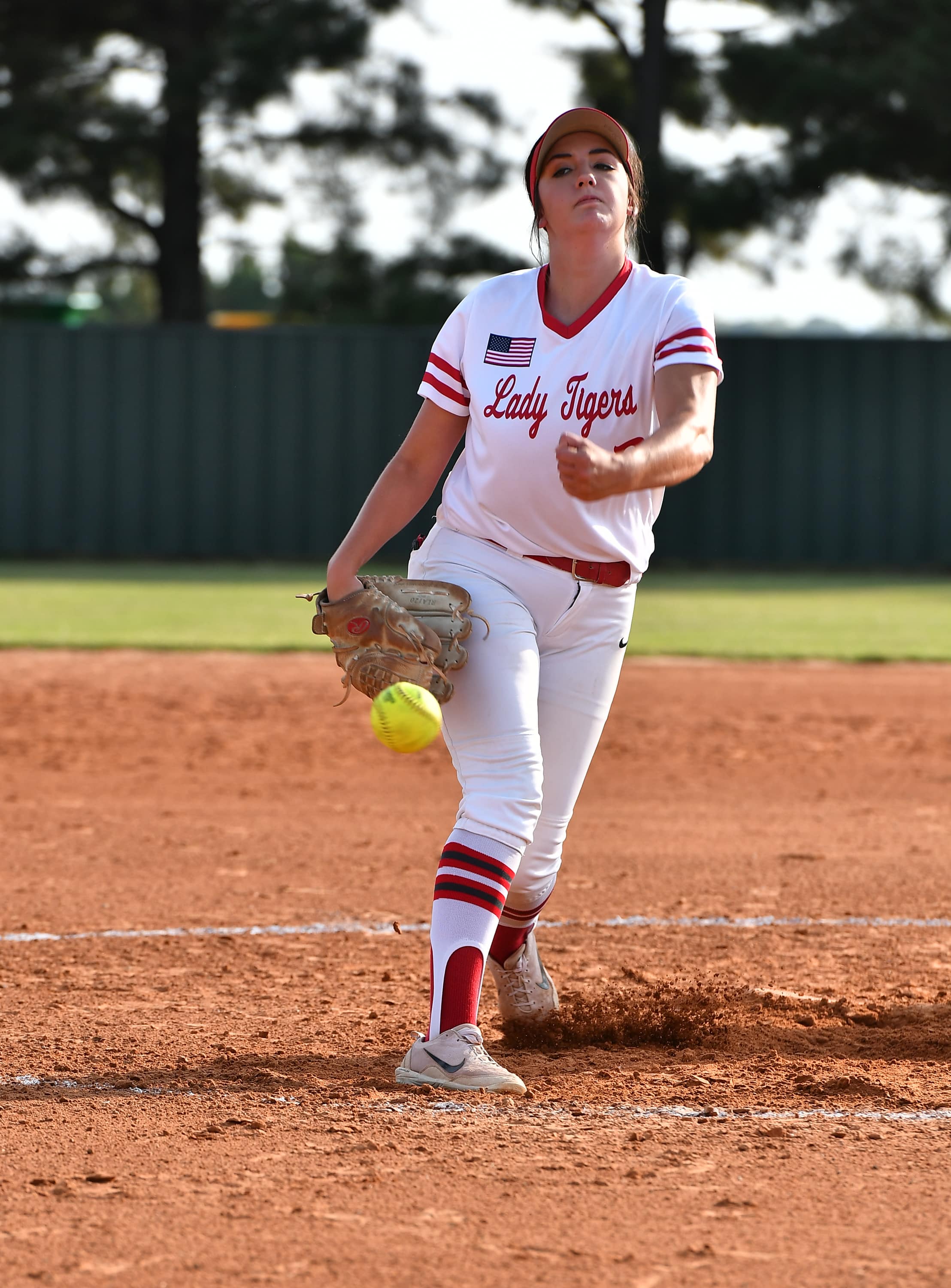 FORT GIBSON – The Fort Gibson Tigers (14-4) hosted their perineal rival Monday night in the Broken Bow Savages (14-8) and came away with a 5-run win to widen their lead in OSSAA 4A-5.

After an opening inning by the Savages that yielded just one single the Tigers started quickly with their first at-bat. Hannah Thouvenel doubled to center followed by a Graci Williams bunt that scored Thouvenel on a wide throw by pitcher Chloe James to first.

Jordan Hayes followed with a single to center scoring Williams for a 2-0 Tigers lead. After two Fort Gibson outs, Abbye Porterfield singled to left, scoring Hayes and giving the Tigers a 3-run lead.

After a Megan Price single in the top of the second the Fort Gibson pitching took center stage. Courtney Hill, the Tigers ace. Janyrie Ganaway Grounded to Hill for the first out and the next two hitters were sent down swinging to end the inning for the Broken Bow. Hill finished with 8 strike outs on the night allowing just 4 hits and one earned run.

In the Tigers half of the inning, catcher Angel Lyons opened with a walk and was advanced to second on a sacrifice to first baseman Ashayla Williams advancing Lyons to second, Thouvenel followed with her second double of the contest scoring Lyons. Hays than had her second hit of the night, a single to right fielder Emily Rodgers, scoring Thouvenel and increasing the Fort Gibson lead to 5-0.

Both pitchers than settled in and it wasn’t until the top of the seventh when Ganaway found a pitch to her liking and sailed a homer run over the 225 foot marker in left for Broken Bow’s only score of the game, breaking up the Tigers shut-out.

Fort Gibson will be right back at it facing Muldrow (13-9) Tuesday in another 4A-5 battle, While Broken Bow comes back down the road to Sallisaw to challenge the Black Diamonds (5-11) before returning home for a rematch with the Tigers Friday afternoon.

Copyright © 2020 Gear Spinners LLC | Website Design and Hosting by Gear Spinners LLC
Warning: Use of undefined constant php - assumed 'php' (this will throw an Error in a future version of PHP) in /home/cssnok/public_html/wp-content/plugins/divi-mobile-menu/mobile-menu-divi.php on line 17