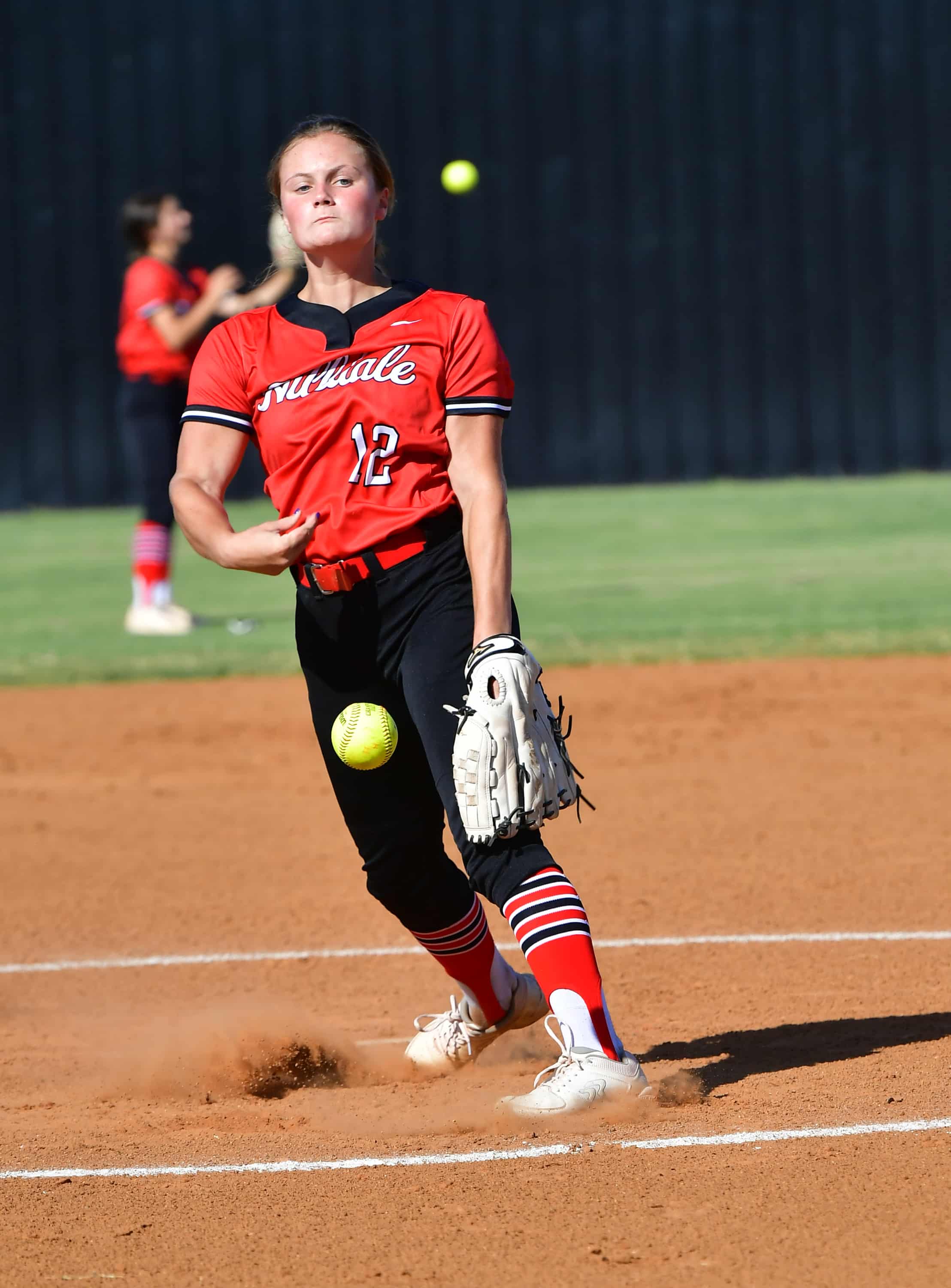 View/Purchase Game Photos
Sign-Up CSSN Subscription
By Mike Kays, Muskogee Phoenix
HILLDALE – The last time out in a game that mattered, Hilldale’s Brooklyn Ellis had the ball in the circle, battling Oklahoma-bound Emmy Guthrie of Lone Grove in a scoreless Class 4A semifinal matchup through five innings.
That matchup was somewhat unexpected. Ellis was Hilldale’s No. 2 arm a year ago.
She’s No. 2 no longer, and in her season-opening performance Tuesday, she struck out 11 and allowed four hits while walking just two in a 14-0 shutout of the Wagoner Bulldogs at the Hornet diamond.
Ellis’ only trouble came in the fourth when Destanee Parrish singled to load the bases with one out. She got Kendra Condict on a strikeout and Aaliyah Goodvoice on a grounder to Lexi Cramp at first. She had one two-hit inning in the second with Brynlee Goodvoice and Parrish collecting hits, but on Parrish’s to right, Bailey McClain made a throw to third to Kensley Allen who got the tagout on Goodvoice.
Ellis then struck out the side in the fifth to end the game on the run rule.
“I thought there were some strike pitches I didn’t get (in the fourth),” she said. “That’s all I needed to do in that spot was throw strikes. I knew they couldn’t catch us in that situation.”
Hilldale coach Darren Riddle, whose daughter Drew was Hilldale’s No. 1 pitcher last year but graduated as the All-Phoenix Most Valuable Player, was happy with what he saw from Ellis.
“Great command, great screwball, great change-up and her curve was breaking hard off the plate, and she got people to chase balls when she got up in the count,” he said. “Eleven strikeouts makes it easy on the defense.”
Ellis knows it’s her team, at least in the circle.
“I’ve got to do the best I can to get my team to state,” she said. “It’s a lot of pressure. Riddle expects a lot out of us.”
That’s what nine consecutive state trips does, not to mention a long line of ace arms, including the third of his three daughters.
“Last year we have Drew ahead of her at 17-3, KayKay (Augustana State signee Makayla Williams) before Drew, and it goes back a ways,” Riddle said. “We’ve been fortunate to have good arms and she’s just another great arm for us.”
Offensively, Ellis was 3-for-4 with a game-high four RBIs, highlighted by a two-run double in the third. Hilldale batted around twice and sent no fewer than eight to the plate in any inning, finishing with 17 hits.
Cramp and Riley Barnoskie were also 3-for-4. Cramp had three RBIs. Allen and Rylynn Clark were both 2-for-2 and Emma Hoffman was 2-for-3, rounding out the multi-hit performances.
“We swung the bats well,” Riddle said. “They misplayed some of those that extended some innings, but I was pleased with a lot of squared up balls that we put in the gap. I was proud of our approach.
“It’s early though. In this one it was hard to see how we were defensively because we were so strong in the circle.”
Hilldale hits the road later this week for a bigger test in the Broken Arrow Tournament,starting Friday.
Wagoner, which lost 14-1 in its opener to Stilwell on Monday, is at Kansas on Thursday.