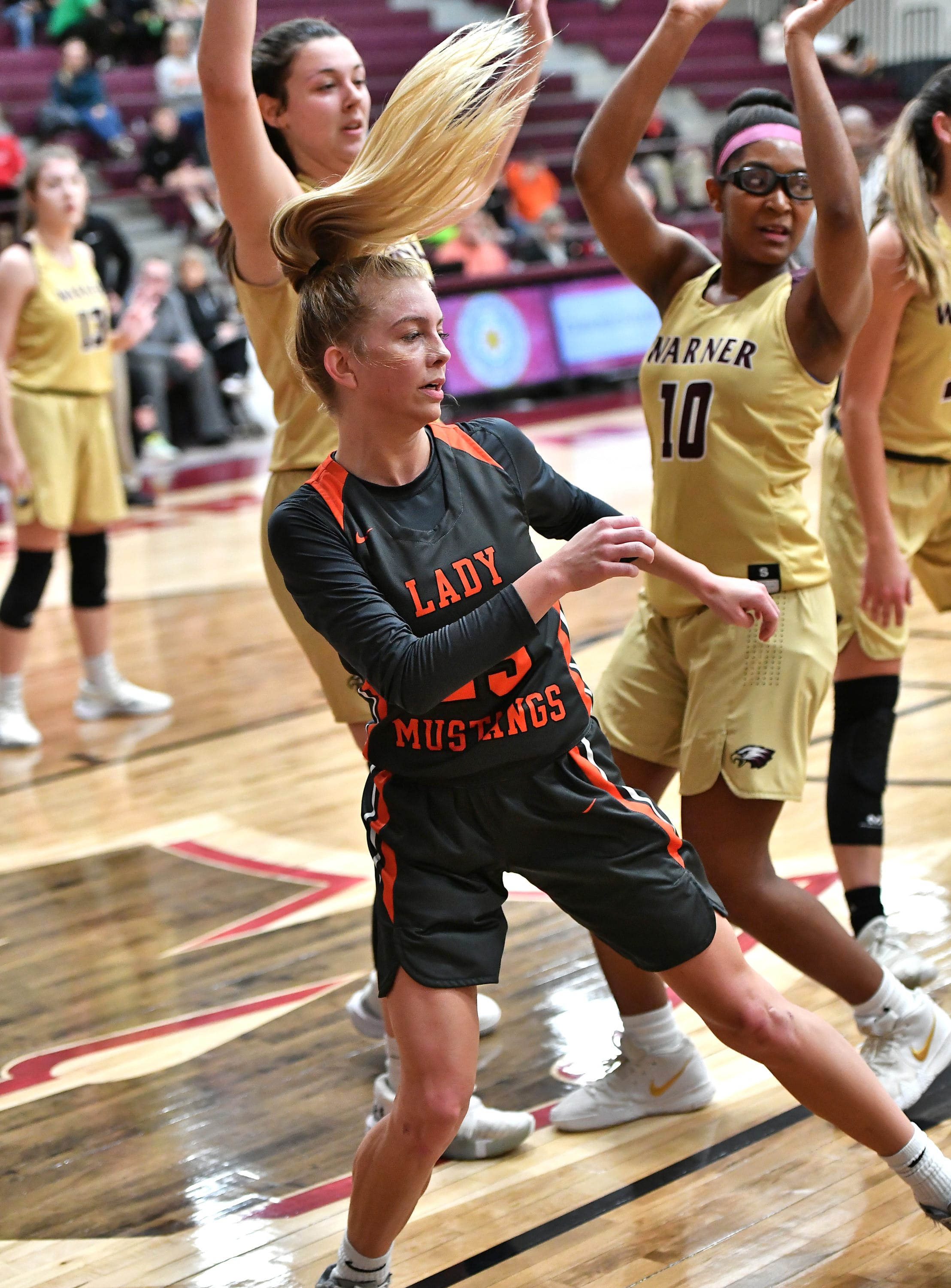 View/Purchase Game Photos
Sign-Up CSSN Subscription
WARNER — After a heartbreaker 2-point loss at Okay back in December that knocked the Lady Eagles out of the OSSAA rankings, and a recent loss in the Warner hosted Cherokee Classic, the Lady Eagles were able to top the 14th ranked Mustangs Thursday night at The Nest 57-51 in a double overtime thriller.

The game’s first quarter saw Okay’s Shayni Green exploding for 13 points including three treys. Green added 8 before the half for an outstanding 21 first half points.

Warner’s tall center, Jaylee Kindred, hit five times from the floor and added one from the stripe for 11 first half points to keep the Lady Eagles within 8 at the break.

In the second half, Warner coach Mindi Peters had to switch something up to slow down Green. That switch was to a man defense that put Sydney West, the Eagles best defender, on Green. West held the Okay standout to just three points from there. “I take a lot of pride in my defense because I know I can lock up any team’s best player,” said West.

Coach Peters later commented that the Eagles could not keep up with the speedy Green in the zone “D” and man-to-man with West was the answer.

A 12-point run in the third led by Emma Sikes and Kylea Terrell closed the gap from an 8-point deficit to a four point lead by the end of the third.

The Lady Eagles were up 45-42 with 25 seconds remaining after a basket by Terrell. Okay moved the ball down the floor and coach Mustangs coach Chad Clark called time out with 12 seconds left. With everyone looking for Green to save the day, it ended up being Macy Anderson, who buried a 3-pointer with four ticks left to force overtime.

Okay was on top 51-49 in the first OT with 10 seconds to play but Mattie Berrie got two of her 14 points with three seconds left to send the game to the second extra period.
The Lady Eagles held Okay scoreless in the second extra session and Berrie hit for 6 points to get the win for Warner.

It was a team effort byThe Lady Eagles (7-2) as they had four players in double figures. In addition to Kindred and Berrie, Terrell had 10 points and Sikes had 12 while Green was the only double-digit player for the Lady Mustangs (12-3) with 24.

The Eagles will be at home again tonight hosting Porter while Okay will be on the road at Arkoma.