Fourteen Down and One to Go 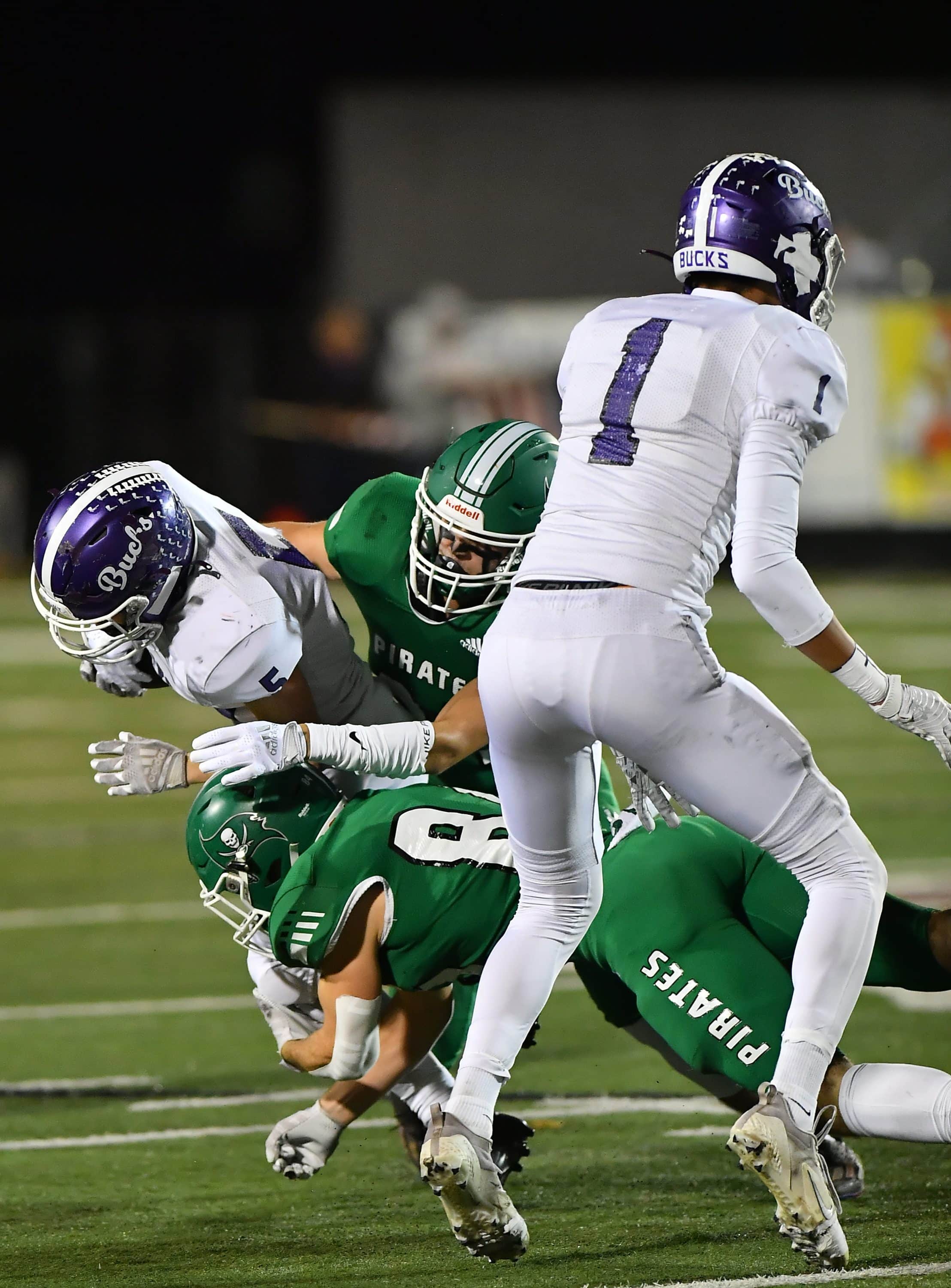 JENKS – The Gore Pirates (14-0) are just one win away from an OSSAA Class A State title after a convincing 48-12 win over the previously undefeated Hominy Bucs Friday night at Allen Trimble Stadium in Jenks.

The Pirates, ranked No. 2 will now take on No. 4 Fairview (14-0) at the University of Central Oklahoma next Saturday night at 7:00 PM. The Yellowjackets earned their trip to the final by defeating Colcord 38-22 Friday night.

It didn’t start well for the Pirates when Hunter McGee fumbled on a punt return, but a staunch Gore defense forced another punt that led to a seven play 68-yard scoring drive, and a 7-0 Pirate lead.

Gunner Dozier did the lions share of the work on the drive rushing for four first downs to set up quarterback Noah Cooper for an 11-yar touchdown run.

Shortly thereafter, Cooper, now at linebacker, recovered a fumble on the Bucs 29. After a holding call (the referees favorite for the night) Cooper scrambled for 25 yards and a first down at the Hominy 12 yard line.

Four plays later, on fourth and one, Dozer punched it in from the three for the score and a 13-0 lead after a Christian O’Connor kick went wide left.

The Gore defense was “spot on” all night, highlighted by a goal line stand that kept the Bucs off the board.

Hominy took possession at its 34 and marched to a first-and-goal carry by Chase Tindell. Four carries by quarterback Jaxon Woods followed, the last on a fourth-and-inches call where his second effort was met by half of the Pirate defense, spurred by defensive lineman Garrett Douthit.

Dozier broke loose on a 67-yard run down the sideline for a first-and-goal at the 8. Two holding calls (imagine that) backed the Pirates up to the Hominy 22, where Cooper connected with Liam Edwards just in bounds at the 1. Edwards, ironically, redeemed himself on one of those holding calls and set up Dozier’s second touchdown from a yard out.

With 1:43 to go until half, the Pirates went 54 yards in five plays, Cooper keeping for 28 being the big play. Jackson Duke’s 9-yard run capped the first half scoring.

Gore received the second half kickoff and marched 74 yards in seven plays, with Duke in for Dozier, who has played the entire postseason with a fractured forearm, took it in on a 6-yard run. Dozier would return and scored on a 1-yard run on a three-play drive set up by Keigan Reid’s interception of Woods at the Bucks 14.

“It got sore in the first half, but we’ve got the quarterback run game and Jackson came in and did a great job spelling me,” Dozier said. “Whatever it takes, we’ll get the job done.”

Dozier finished with 163 yards on 15 carries and three TDs. Duke also scored three times and Cooper had 124 yards on 17 carries and a score.

Douthit added “It’s really amazing. We have faith in our guys, faith in our coaches, that we could get to this point since we were freshman. We’ve persevered and we got one more to go.”