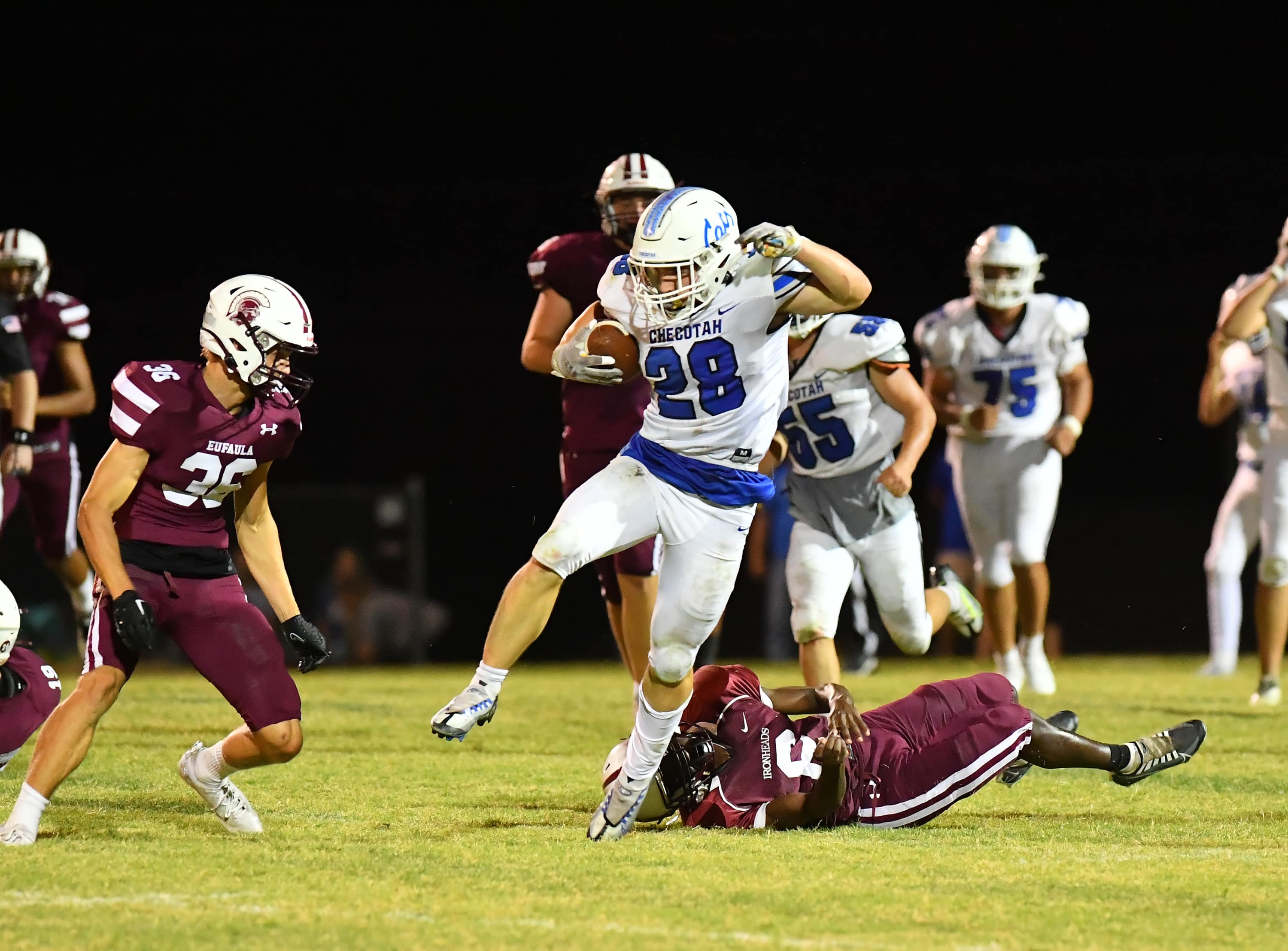 EUFAULA – The Ironheads of Eufaula (2-1) won its fourth straight MacIntosh County battle with the Checotah Wildcats (2-2) and tied the oldest rivalry in the area 53-53-1 over the past 107 games.

Luke Adcock rushed for 129 yards and passed for 157 as Class 2A No. 5 Eufaula cruised to a 45-7 win over Checotah Friday night at Paul Bell Stadium.

The meeting of the two teams is more than just a game. It is a battle between two towns that began a long, long time ago.

This year it was decided quickly after Eufaula jumped out to a 21-0 first quarter lead. It began with Brett Pippenger hauling in a 17-yard pass from Luke Adcock at 7:26 remaining in the first quarter.

Adcock played a major role in the Ironheads’ domination. He threw for two touchdowns, one each to Brett Pippenger and Kaden Rice, and ran for two as Eufaula got off to the fast start.

But Adcock was not the only Ironhead making plays. Gavin Watkins rushed for 121 yards and a score while Rice had four catches for 79 yards.

Adcock also made his presence felt on the defensive side of the ball with two sacks, including one on the first play of the game that set the tone.

Checotah finally found some offense late in the first quarter behind the running of Kreed Hall. Hall, who finished with 127 yards rushing, used a 35-yard run to set up the Wildcats deep in Eufaula territory.

It appeared the drive would stall but on fourth and long Bronson Bouher found Konner Collins for a 29-yard scoring strike that cut the lead to 21-7. It would be as close as the Wildcats would get.

Eufaula built a 35-7 halftime lead before penalties and lackadaisical play on both sides made for a sloppy third quarter. The Ironheads were flagged 15 times, Checotah had 14.

Eufaula scored on five of its first six drives then punted three times, lost a fumble, and had a deflected pass intercepted by Hall. It wasn’t until the final two drives that the Ironhead offense regained its focus.

Bouher started the game for Checotah but only connected on two of his 10 pass attempts while being sacked three times. Muskogee transfer Jacob Jones replaced Bouher late in the first half. Jones finished with nine completions on 19 attempts for 118 yards.