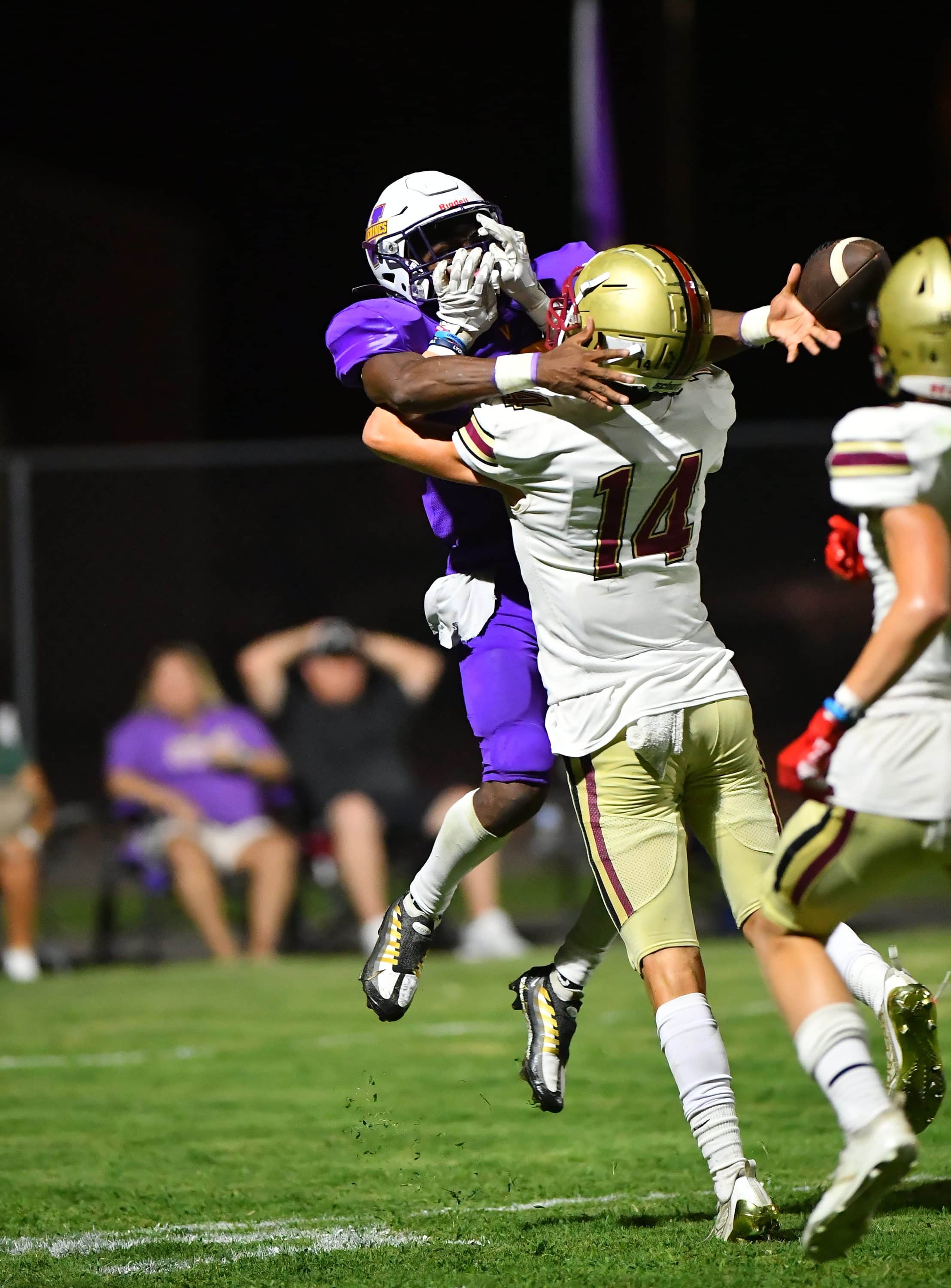 VIAN – The Lincoln Christian Bulldogs ran over the Vian Wolverines Friday night in a 42-0 rout at Vian.

The Bulldogs displayed their high-powered, quick-strike offense, along with a stingy defense that stymied Vian in the 42-0 shutout Friday night at St. John Stadium.

The Class 3A No. 2 Bulldogs limited the 2A No. 3 Wolverines to 247 yards in collecting the road shutout to move to 3-0 on the season. From the start, every time the Wolverines threatened, the Bulldogs shut them down.

Vian’s opening drive ended with an interception by Lincoln Christian’s Cam Dooley, and that set the theme for the night.

After the pick, the Bulldogs wasted no time with a 54 yard 5 play drive that took just 41 seconds, taking a 7-0 lead on a 1-yard plunge by Moses Fullingim and the PAT kick by Drew Lancaster.

Lincoln Christian held the ball for just 3:16 seconds in the first quarter, opening up a 14-0 lead on Fullingim’s 10-yard run with 2:28 to go in the first.

Vian then put together its best drive of the game and had a chance to cut the deficit in half with first-and-goal at the 5. But a fumbled snap, an incomplete pass and a 5-yard sack by Mason Torres left the Wolverines with a fourth-and-goal at the 15. The fourth-down Diego Ramos pass to Gage Carlton came up short of the end zone, ending Vian’s 15-play drive.

Lincoln Christian wasted no time responding, going 94 yards on six plays in just 2:10 to go up 21-0 and take control on a 23-yard reception by Jimmy Martin from Luke Milligan.

After the Wolverines (1-2) turned the ball over on downs again, the Bulldogs made it 28-0 just over three minutes later when Milligan found Dylan Baldridge for an 8-yard scoring strike.

Lincoln Christian put up four touchdowns while holding the ball for just 7:25 out of the opening 24 minutes of the first half, going to the locker room with a 28-0 half time lead.

The Bulldogs scored on their first two drives of the second half and cruised from there, the exclamation point coming on a 39-yard TD strike from Milligan to Baldridge.

The Bulldogs starter played just three quarters and finished 15-of-18 for 242 yards and three touchdowns.

Vian was led by outstanding freshman Masyn Wright, who ran for 95 yards on 20 carries.

The Wolverines will get the week off next Friday before heading to Warner to start district play and take on the 2-0 Eagles on the 23rd.